Bordeaux's Château Mouton-Rothschild has never shied away from bold, even provocative choices for its annual art labels, but the 2017, featuring an illustration by French artist Annette Messager may be the first in decades to raise eyebrows at the Alcohol and Tobacco Tax and Trade Bureau (TTB), America's beloved authority on alcoholic beverage rules such as which depictions of the human body are too indecent to be displayed on a product that can only legally be sold to people 21 and older.

The work is entitled Hallelujah and shows a glass of red wine, the words "Hallelujah" and a pair of nude breasts, the latter evoking a mother's milk. 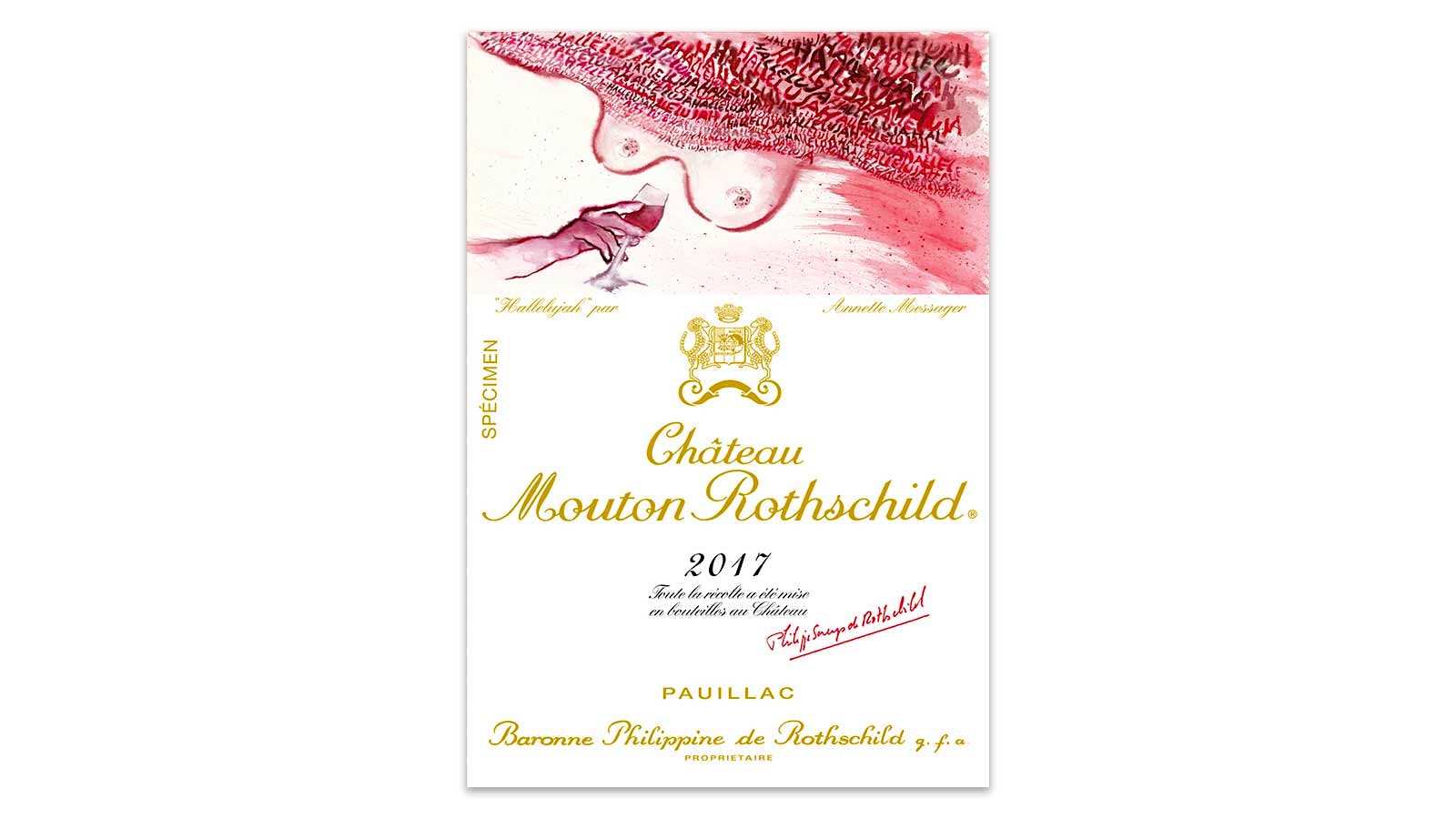 "In an approach that is both realistic and symbolic, [Messager] combines two substances, milk and wine, which the Bible often associates with each other, hymning the virtues of both," wrote Julien de Beaumarchais de Rothschild, co-owner and vice chairman of Baron Philippe de Rothschild SA, in press materials released with the label. In her corpus of work, Messager uses "objects, shapes and words from everyday life to create a world of sometimes joyful, sometimes alarming poetry, marked by her feminist convictions."

Messager has won renown for her work in many mediums, including the Golden Lion at the Venice Biennale in 2005 and Japan's Praemium Imperiale in 2016. "As such, she is perfectly in line with the famous artists who have illustrated the labels of Château Mouton-Rothschild vintages since 1945," de Beaumarchais de Rothschild elaborated in an email to Unfiltered.

The Rothschilds are longtime patrons of the arts. The three siblings who now own the estate have taken up the mantle of their late mother, actor and Baroness Philippine de Rothschild, supporting up-and-coming ballet dancers with the Clerc Milon Prize and raising money this year for renovations at Versailles and the fire-damaged Notre-Dame. Most famously, of course, they commission a different artist each vintage to draw up an original design for the label of the Pauillac first-growth, with the artist receiving cases of wine as payment.

The TTB and its predecessor authorities have been known to consider themselves arbiters of what is and isn't serious artistic merit, and perhaps the most famous contretemps involved Mouton. But much as we love to razz our occasionally prudish federal wine overlords, it didn't go down quite how some remember. The Rothschilds picked Balthus to do their 1993 label, he produced a drawing of a nude girl, American authorities actually approved the label at first, but a California sexual-abuse awareness group sent a letter of objection. Mouton pulled the label and sent American drinkers one with a big ol' blank spot where the art part normally appears instead.

Will Americans again be treated to a special-edition no-art label? "The request has been made to the TTB," said a spokesperson for Mouton. "But we have not yet received a response."

Enjoy Unfiltered? The best of Unfiltered's round-up of drinks in pop culture can now be delivered straight to your inbox every other week! Sign up now to receive the Unfiltered e-mail newsletter, featuring the latest scoop on how wine intersects with film, TV, music, sports, politics and more.

Sixers Star James Harden Puts the Beard on the Bottle